We have a Japanese zombie apocalypse, some twisted home-invasion movies and much more….I hope you enjoy.

I AM A HERO

I Am A Hero is a zombie manga series from Kengo Hanazawa that was first published in 2009 (and still ongoing). The story of a comic book artist that is left to fight off hordes of the undead armed with his trusty shotgun (sold already).

I know a lot of people are sick of the undead roaming our screens, they are everywhere. One thing though, we ain’t seen much zombie action from Japan, and we know how crazy the Japanese can be.

The live action adaptation is directed by Shinsuke Sato

The story begins with Hideo Suzuki, a 35-year-old manga artist assistant, whose life seem to be stuck around his exhausting but low-paying job, unfulfilled dreams, strange hallucinations and unsatisfying relationships. He sees himself as a supporting character in his own life, has low self-esteem, resulting in frustration.

One day, the world as Hideo knows it is shattered by presences of a disease that turns people into homicidal maniacs, whose first instinct is to attack and devour the nearest human. Armed with only his sporting shotgun, he runs for his life, meeting strangers along the way. All the while, he and his companions struggle to stay alive, while questioning their moral choices.

Don’t Breathe has picked up some great reviews and seems to be a tense and violent thriller/horror.

It is written by Fede Alvarez, and Rodo Sayagues with Alvarez directing. You might remember Alvarez as the guy who gave us the Evil Dead remake back in 2013.

The plot sounds simplistic enough – an easy plot to set the cast up for some really vicious on-screen deaths. It’s a home-invasion movie, only the roles are reversed – A group of teens break into a blind man’s house to steal a load of cash) The invaders soon start to regret breaking into this guy’s house as the blind guy is more than ready to fight back.

From what I am reading, Don’t Breathe is relentless and brutal which proves that Alvarez is still on top of his game when it comes to shocking his audience.

A group of teens break into a blind man’s home thinking they’ll get away with the perfect crime. They’re wrong. 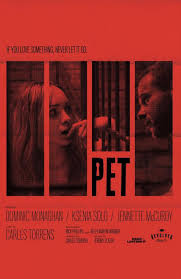 Pet recently had its premiere and the reviews have been solid, although all of them state that Pet is a tough watch (I’m fine with that).

The film focuses on a guy who meets an old flame who he ain’t seen in years, and starts to become obsessed with her. His obsession soon escalates to a horrifying new level when he kidnaps her and holds her hostage in a cage buried deep in the basement of the animal shelter that he works for.

Seth (Dominic Monaghan) works at an animal shelter, and for years has been secretly in love with a waitress named Holly (Ksenia Solo). When he repeatedly fails in his attempts to woo her, he decides to lock her in a cage at the shelter where he works. He soon discovers that Holly is not who she appears to be and it is no longer clear who is the real victim.

Another new indie horror that has generated quite a buzz on the festival circuit. I am hearing that this low-budget home-invasion movie is a highly effective one with strong performances from a very minimal cast.

The new film from Mike Flanagan, the director of Oculus. Flanagan’s previous movies were met with mixed feelings from both critics and fans. It looks like this simple little horror could be his best work to date.

Hush is written by Flanagan and Katie Siegel with Siegel also in the leading role.

The film focuses on a deaf woman who gets attacked in her secluded home by a psychotic killer (complete with creepy Michael Myers type mask). As I said above there is basically only 2 people in the movie, apart from the odd neighbour stopping by or a conversation with her sister the film is just focused on the psychotic killer and his victim.

Streaming giant Netflix have already snapped up the rights to Hush , and should be available to stream from April for those of you who have Netflix U.S

Baskin has been high up on the watch-list since last year.

The trailer has to be one of the best trailers I have seen for a horror movie in a long time and the reviews are as equally as good.

The film looks insane, full of blood, gore and what looks to be tons of practical FX which is always a joy to see in modern horror movies.

Turkish director Can Evrenol looks to have taken inspiration from Clive Barker’s Hellraiser, while at the same time adding in what looks like a very dark and sinister as fuck version of Silent Hill.

Five police officers, Remzi, Arda, Yavuz, Apo, and Seyfi, are dining at a restaurant, during which they start discussing sex. Their meal is interrupted when they’re called away to answer a distress call at Inceagac, a town known for being the focus of strange rumors. During the trip Seyfi experiences a terrifying vision of a bloody figure and accidentally drives their van into the water. The officers eventually find themselves in Inceagac, where they’re trapped in an abandoned building, captured by cult members and experience a number of increasingly bizarre and surreal scenarios.